There is hiking and then there is hiking. Hiking is what most people know. A nice day stroll to a meadow or lake with some comforts, such as a picnic lunch and lounging in the sun. Some may even be more adventurous and go hiking for an over-nighter or two. Hiking by comparison is quite different. See for yourself:

There is nothing worse than meeting someone on the trails with a far lighter/smaller pack. Nate or “Rainer” (See below) carried 30 L (A fellow through hiker. A through hiker is someone who hikes the CDT in one calendar year). Liam carries 105 L. He carried no tent. He had no stove. And I very much doubt we carried enough yarn to even knit three sweaters…

First, the size of the backpack. Hikers don’t have large backpacks, forgoing many luxuries. Some have no tent, only a tarp. Some even carry no stove, just a peanut butter jar. When you are within an hour of where you wish to camp, you add cold water to Mr. Noodles. It slowly hydrates…The ends of toothbrushes are sawn, clothing labels torn off, and pages of books burned after reading. They become obsessed with weight and the never-ending-battle to carry less. It takes over your life… 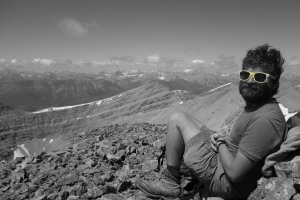 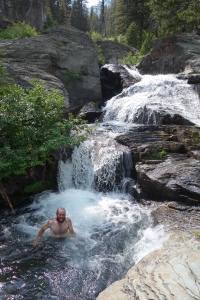 Hikers have trail names. Traditionally, you are named by someone else. Each name has a story attached to it. So far, we have met Rainer, Snowplow, Birdy, Viking, Chili, Pepper, Tibetan (He likes to read about Budda) and Strider (He has llooonngg graceful legs). Sometimes you don’t even learn people’s real names.

Muppet (Or Liam)  apparently has a hair problem at the moment. Ducky (Known by Jake to Some) waddles down the trail. 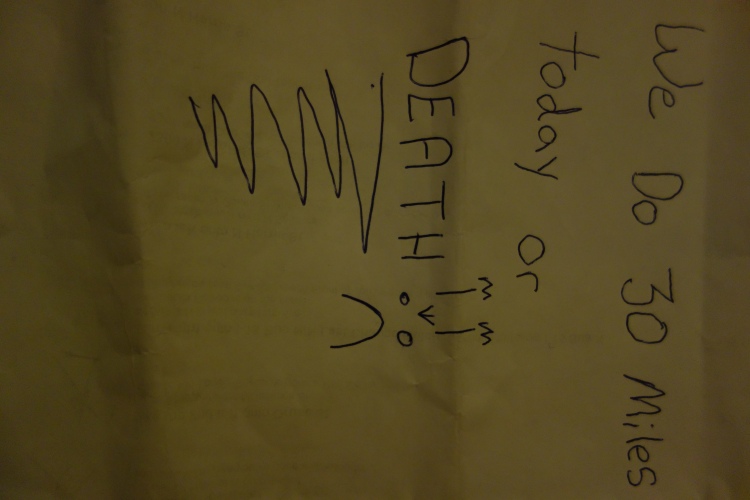 Mileage! Mileage! Mileage! People think we have a lot of spare time during the day. We don’t. We go from dark to dark. If I get my half an hour to knit, write, and read at the end of the day before falling into a sleep coma, I’m happy. Most hikers do between 35 – 60 km a day. Hmmm no wonder my feet are falling apart (See below). 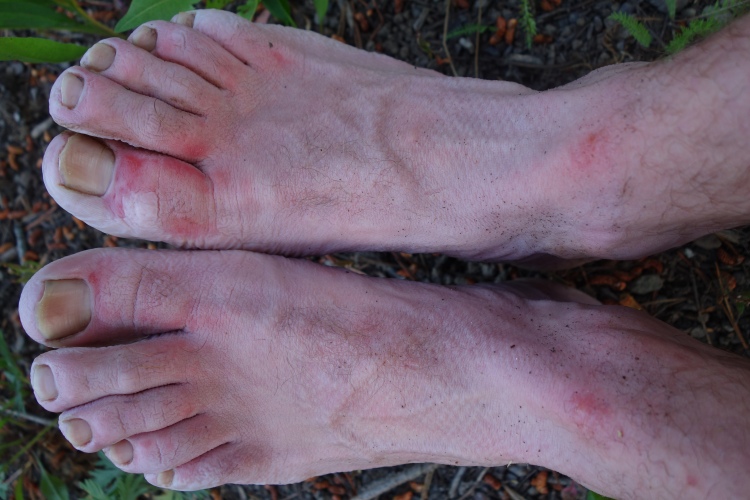 Sadly, this is after a “good” day. I use to have pretty feet. But alas! No more. I can’t believe I’m saying this, but I’m getting a pedicure when this is over! 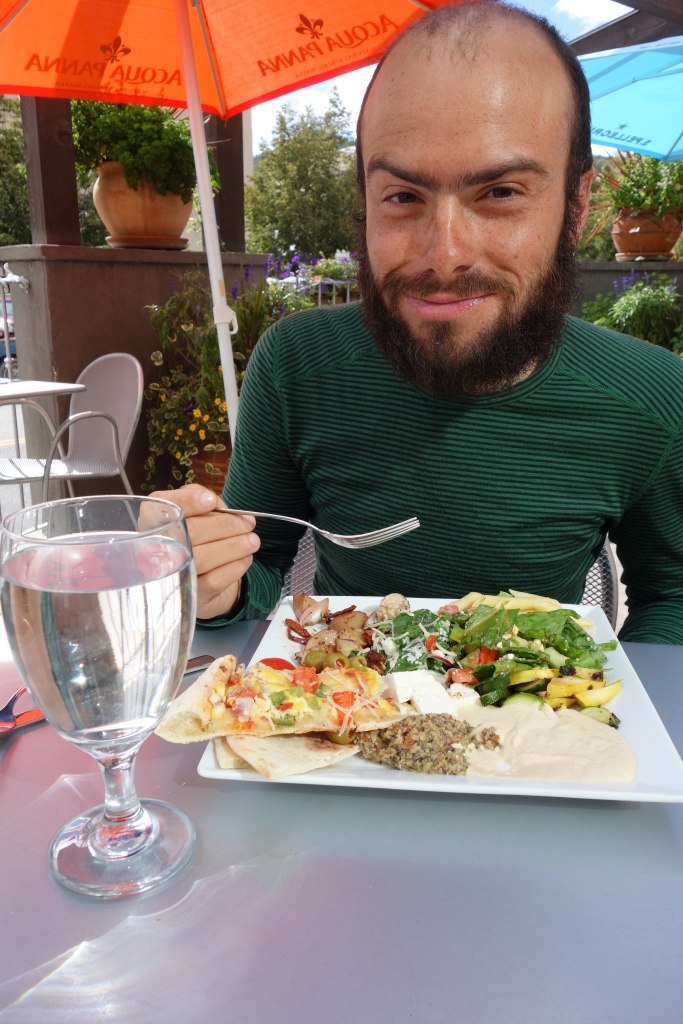 At a buffet brunch in Helena.

You binge eat. You become obsessed with food. And given the opportunity, you can out eat anyone. We just ran into a hiker who went to a pizza buffet. After eating 28 slices, he was asked to leave. It reminded me of the Simpsons…Our life is a cartoon! http://m.youtube.com/watch?v=yL9bPjkOc1Q

Foraging blueberries along the Chinese Wall in “The Bob”.

Your only fruits and veg are what you can forage or really grab as you rush/pant by.

Saving some Kraft Dinner for later…

You grow a beard. Carrying a shaver just isn’t worth it. 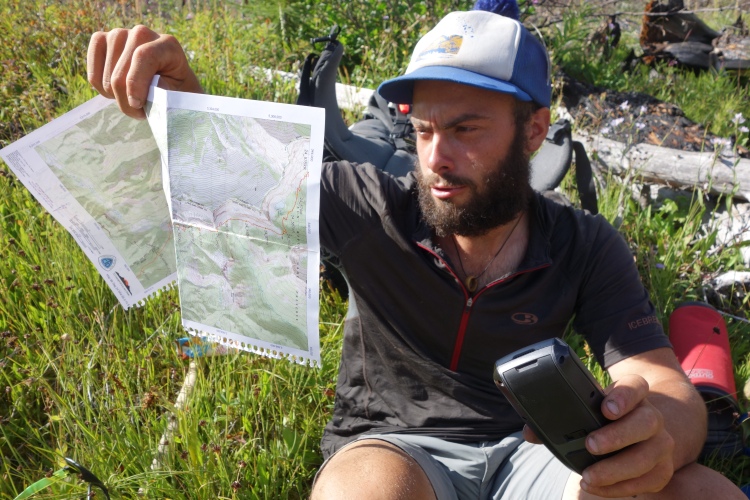 Greenhorn Mountain? GREENHORN MOUNTAIN?! IT SHOULDN’T BE THERE! IT WAS THERE 3 HOURS AGO! WHERE-THE-HELL-ARE-WE??!?

Expect to get lost. It can be hard to tell one sage bush covered hill from another. And navigating amongst backcountry roads is the worst!

Bushwacking near Howse Pass on the Great Divide Trail (Canada).

Sometimes there isn’t any trail and you have to bushwack. Also known as character building.

Everything falls apart. Nature shows no mercy. Eventually, you begin to wear rags. 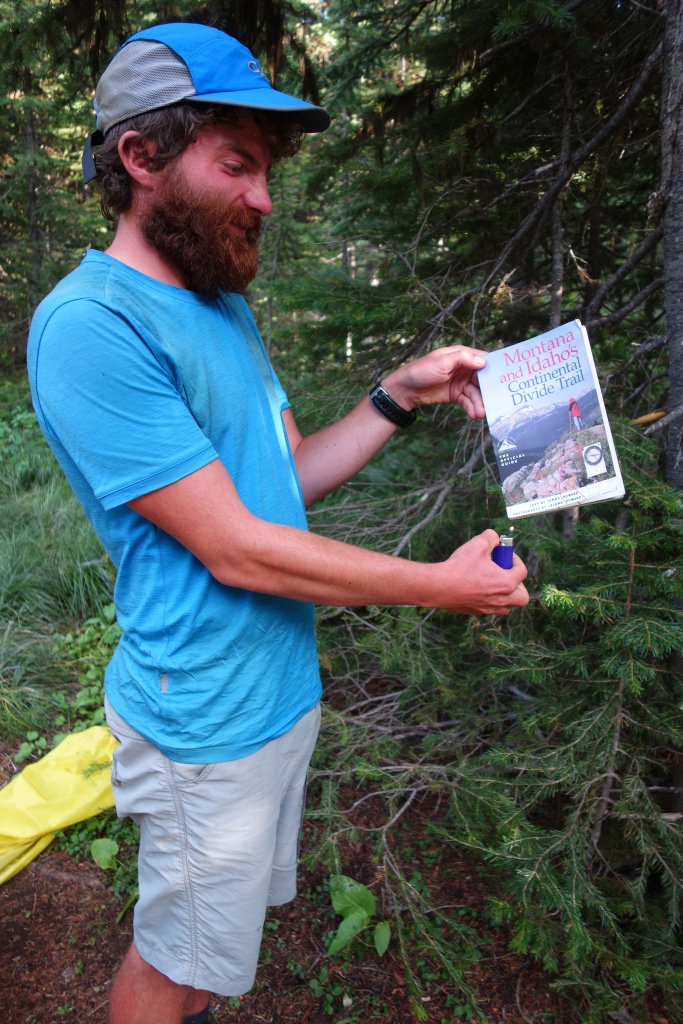 The worst guide-book. Ever. Not only does it weigh 300 pounds. But it is stuffed with redundant and useless information. Such as walking single file on the trail, eat every 90 minutes, and don’t litter. As this book is made for long distance hikers, it can be safely assumed that THEY ALREADY KNOW THIS! Even directions to some trailheads is useless. For example, in the description for the  Summit trailhead, the author admits, “I don’t know where it is. Even though rangers said it should be obvious we could never find it. Maybe you will have better luck.”….Thank you  Mr. Guide Book. You have been an ENORMOUS help! NOT! BURN FOR IT!

You struggle with guides. Eventually you become to realise that some of them are practically as useful as going blindfolded into the woods. Except they weigh more. 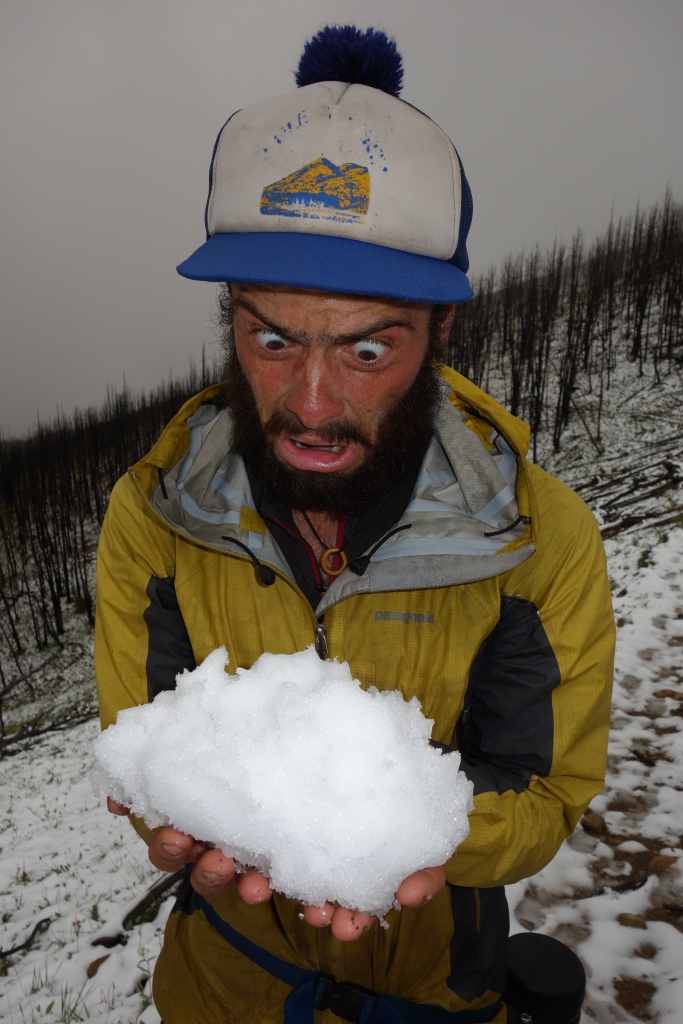 The horror at summer being over. Ah!

Looking into Waterton National Park, where a wall of rain/hail awaits…

You hike through all kinds of weather. Rain, snow, or shine. Hopefully, just shine. Unfortunately, that is not always the case.

Hitching into a nearby town to resupply. However, the US is weird. We have had cars stop and before giving us a ride, they asked if we have any guns. “Oh yes. Of course we do. I mean, we saw the ends off our toothbrushes to save weight, but we still carry an arsenal. Just to be safe from those nasty nasty grizzlies.”

You depend on hitch hiking to towns to resupply. Think of the following the next time you drive past a hitch hiker. Perhaps he has walked to that very spot from another country. Perhaps this is the first time in weeks he has encountered people. Perhaps he’s hitching because his feet are blistered and bloodied. Perhaps its Friday and he desperately needs to get to the post office before it closes for the weekend. Perhaps he is in desperate need of cheesecake and beer.  Perhaps he doesn’t want to be there just as much as you don’t want to pick him up. Perhaps. 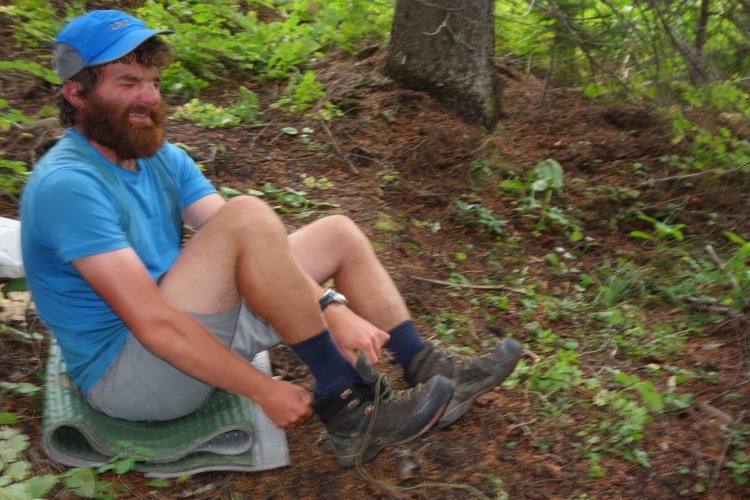 You have wet feet. For days. Hello trench foot. 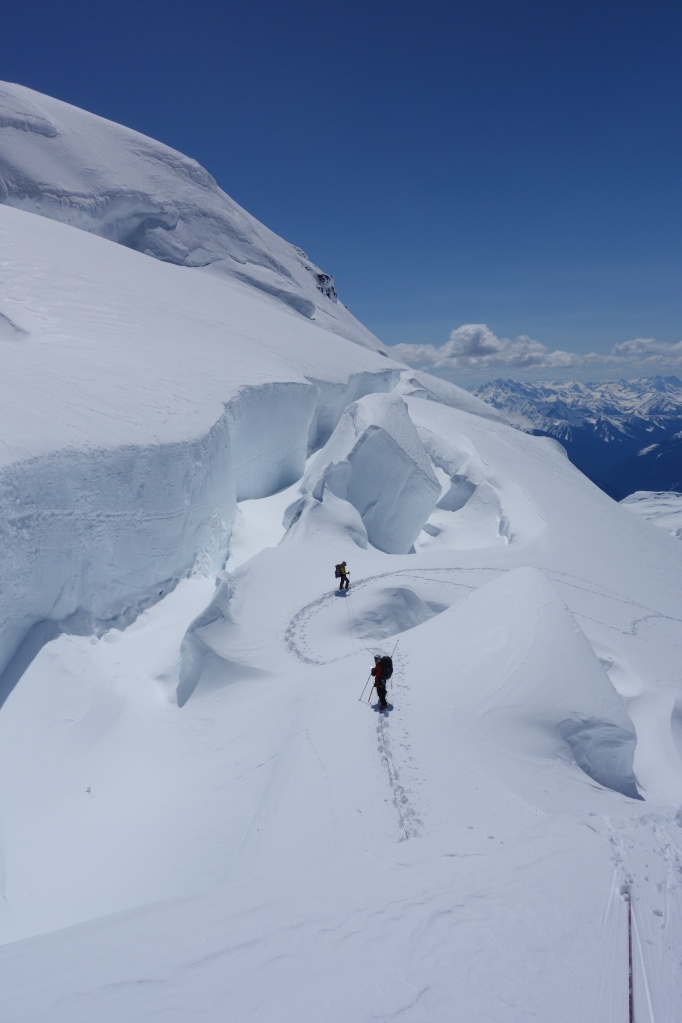 People seem to always be keen to tell you about upcoming dangers. Avalanches, bears, cougars, getting lost, crazies, the borders, the mexican border (this one especially. We have had people tell us to walk through Texas instead of New Mexico. Of course they fail to realize that we are hiking. To walk to a neighbouring state instead would add weeks!), winter, snakes, and did I mention bears? 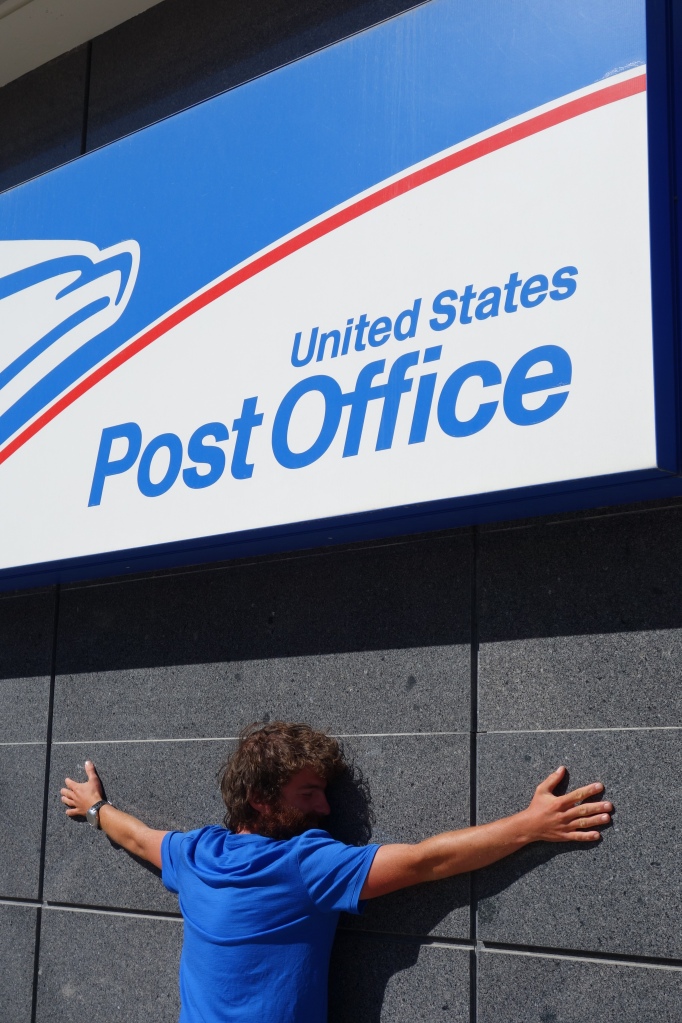 Hikers become best friends with the postal system. You send things to yourself in the future. Such as maps and shoes. I have even heard of people mailing their backpack to themselves just a few miles down the road. Sometimes you get desperate and do the absurd.

Going along the divide in the Castle Wilderness, by Waterton. While its beautiful, but dry. Like a desert. You walk along on the roof of the world, with water water everywhere in view, but just out of reach.

Obviously, the CDT follows the divide. Water becomes a huge concern. Sometimes you don’t come across a single puddle for over 25km. Sigh.

Camping on Burnaby Ridge. One of our favorite camping spots.

You get to camp in amazing places.

But no matter what the trail throws at you. You always have that cup of tea to look forward to at the end of the day. 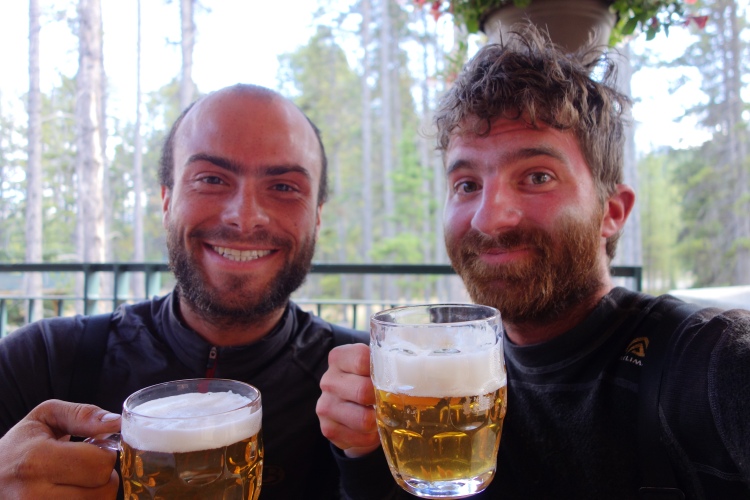 Beers in Lake Louise after 40 days in the bush.

And beers in the next town. Its moments like this that make you realize that all the unpleasantness at times is totally worth it. In the end, it’s one big grand adventure! Yeehaw!